Grad up and running 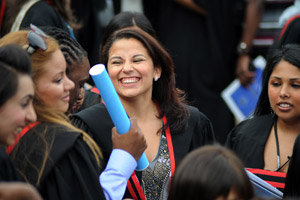 The December 2010 graduations are hitting its stride, with three ceremonies under the belt and another two lined up for today, Friday, 17 December.

The Faculty of Health Sciences kicked off proceedings on Wednesday when it capped its undergraduate COHORT. At that ceremony, the faculty also toasted its own Professor Dan Stein, who was named a UCT Fellow earlier this year. In addition, UCT formally presented the 2010 Distinguished Teacher Awards to the faculty's Professor Roland Eastman and Professor Zephne van der Spuy.

On Thursday, 16 December, it was the turns of the Faculties of Humanities (in the first of its four ceremonies over graduation week) and Science (first of two) to cap the studies of some of their graduates. At the science faculty ceremony yesterday afternoon, Professor Timothy Egan was officially welcomed as a UCT Fellow.

Saturday, 18 December, will see the Faculties of Humanities, Commerce and EBE take charge of the day's three ceremonies.