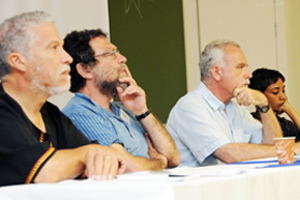 Talking shop: Prof Lionel Louw of the Harold Wolpe Memorial Trust, UCT's Prof Ari Sitas and Dr Jonathan Grossman, and Prishani Naidoo of the University of Witwatersrand ponder some questions at one of the sessions of the New Trends in Labour Studies conference.

As its title hinted, the conference on New Trends in Labour Studies: New workplaces, communities and livelihoods, held at UCT from 1 to 3 December, wanted to explore changes.

The first changes, explains conference co-ordinator, Professor Ari Sitas of the Department of Sociology, are those that have occurred in the workplace, notably around the loss of job security over the recent past. Then there's been the rise of megacities and its particular politics - inclusion, exclusion, migrancy, xenophobia and the like.

Also, the academic interest in work - once a mainstay of sociological studies - has hit a slump of late, says Sitas.

So there was plenty to catch up on over the three days, as the conference's packed programme illustrated. Delegates, including many international visitors, tackled issues ranging from women and livelihoods to opportunities for unionism, the links between labour and social movements and the collapse of work, as well as land issues and the dynamics of organised work.

The aim of the event was threefold. Firstly, to explore changes for the national and UCT curriculum as it's related to labour, changes that are sensitive to South Africa's place in Africa and the global south; then to establish research collaborations in the country; and, finally, to rekindle the study of work and labour at universities, tapping into the enthusiasm of the next crop of academics.

"We want to create a community of scholars among the younger generation," says Sitas. "We want to get the new generation in the country talking to each other." New Trends in Labour Studies was co-hosted by UCT and the Harold Wolpe Memorial Trust.