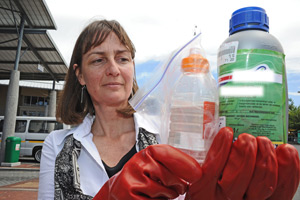 Pesticide patrol: Dr Hanna-Andrea Rother is the 2010 recipient of the VC's UCT Distinguished Social Responsiveness Award for her work on the use of illegal and highly toxic pesticides among the poor in Cape Town's peri-urban communities.

Dr Hanna-Andrea Rother's work on the consequences of the use of street pesticides on children's health and health policy has earned her UCT's 2010 Distinguished Social Responsiveness Award.

Established by vice-chancellor Dr Max Price to promote the university's commitment to social responsiveness as an important institutional activity, the award is valued at R25 000 and is open to staff whose activities benefit not only UCT, but also an external community.

Rother's pioneering work in this un-researched area of public health has already influenced state policy. Armed with her research, Rother challenged government and NGOs with possible solutions to the use of illegal and highly toxic pesticides among the urban poor in Cape Town's peri-urban communities.

The programme leader of Health Risk Management in the Centre for Occupational and Environmental Health Research, Rother brought to light the popular and extensive use of agricultural pesticides (not intended for household consumption, as they are too toxic) for tackling poverty-related pest infestations.

Not only did she uncover highly toxic occupational exposures for informal vendors of these street pesticides, but she was able to link child exposures and poisonings, predominantly as a result of accidental ingestion. This is because street pesticides are sold in common drink bottles such as those used for water, fruit juice and alcohol.

Rother's project was one of co-operation. A community NGO co-initiated the project and participated in the research design. A Child Pesticide Policy reference group (representing the community, child health practitioners, researchers and government) was established to discuss the research process, findings, problems and interventions.

As well as scholarly output, Rother's initiative also resulted in risk communication tools for spreading the knowledge. A point chart/algorithm was developed for identifying and treating cases of poisoning by street pesticides, for use by clinicians, nurses and health promoters in health facilities, and by environmental health professionals nationally.

Communication tools such as stickers on the hazards of street pesticides have been produced for national and international distribution. A pamphlet in three languages raises awareness of pesticide hazards for children. A wall chart on prevention of child pesticide poisoning was inserted into a local newspaper.

Nationally, a new notification form to improve the system for reporting pesticide poisoning has been implemented by the national Department of Health, and presentations have been organised by the Departments of Health and Environmental Affairs and Tourism.

Rother's programme also focuses on equipping under-resourced officials in Africa in order to reduce the risks from pesticide use, particularly for vulnerable populations. The programme includes bi-monthly online Vula seminars and a new postgraduate course in Pesticide Risk Management, with pesticide regulators from most African countries and resource persons from several United Nations organisations.

The project is also a learning experience for undergraduate, honours and master's students in the Faculty of Health Sciences and the Department of Anthropology. They conduct community-based household surveys, collect narratives from families of poisoned children, participate in field observations, interview informal sellers of pesticides, work alongside community fieldworkers and design risk communication tools.

Rother's award will be used to further her social responsiveness initiative, and showcases the valuable contribution soft-funded academic staff make to UCT.

Rother's programme also focuses on equipping under-resourced officials in Africa in order to reduce the risks from pesticide use, particularly for vulnerable populations.