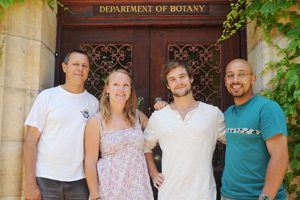 On Thursday 25 November botany MSc student Emma Gray and staff from the Seaweed Research Unit and the botany department foiled a thief as he was making off with MSc student Glenn Moncrieff's laptop.

Montcrieff is set to graduate this month, and his laptop contained important research data. The laptop was stolen from Gray and Moncrieff's office while Gray was busy making headway on her own thesis. She spotted the thief as he was fleeing the scene.

Alerting others, she gave chase. Mark Rothman and Rob Anderson were first on the scene and managed to apprehend and restrain the perpetrator who was later handed over to Campus Protection Services. The slippery character is currently in police custody.

"It's great to know that we all work in a place where crime-fighting superheroes lurk behind office doors humbly labelled 'Seaweed Research Unit'."