Past traumas are a present problem 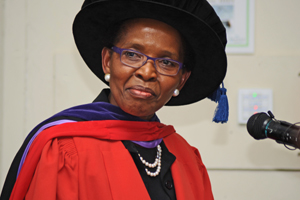 Working through trauma by facing the past is at the heart of transformation, said Professor Pumla Gobodo-Madikizela, in her much anticipated inaugural lecture, titled The 'Face of the Other': Human dialogue at Solms Delta and the meaning of moral imagination, delivered at UCT on 11 November.

This, said Gobodo-Madikizela, is the central feature in her world-renowned work on trauma, empathy and forgiveness in post-apartheid South Africa.

"The questions that I have been dealing with in my work are part of both a personal and professional journey," said Gobodo-Madikizela of UCT's Department of Psychology. "My work grew out of the investigation of extreme violence committed in collective context."

Gobodo-Madikizela argued for a crucial link between violence and trauma.

"Trauma leads to a disruption of the protective aspects of functioning," she said, explaining that severely abused individuals have a tendency to "cut off", or dissociate from, painful experiences to protect themselves from confronting pain.

Unfortunately, traumatised people learn to 'cut off' such painful or stressful experiences by taking it out on others - thereby perpetuating a cycle of violence.

Gobodo-Madikizela describes this process as 'acting out' trauma - the opposite of "working through" it, and applies this theory not only to individuals, but groups.

"When a group has suffered victimisation and share humiliating injury, the 'narrative' of this victimisation establishes an imprint in the group's identity, and becomes a theme in the group's violently 'acting out' this past trauma. These traumatic re-enactments are known to be passed on from one generation to the next, playing out cycles of violence that so often repeat themselves historically.

"Perhaps we can now consider the possible link between the excessive violence of the 'necklace' murders they committed, and their past traumatic history."

"Suggesting that people must 'forget the past' creates great conceptual mischief," she argued. "Those at the margins wake up daily to face feelings of worthlessness and a yawning void of emptiness in their lives. One cannot bestow a sense of worth on others' lives if one does not know what worthiness means."

But Gobodo-Madikizela points out that her appeal for recognition of the past is not to kindle old hatred, but to transform that past - or, at least, its effects.

"The multiple dimensions of the story of apartheid, a practice that has been called a crime against humanity, and the sheer burden that it imposes at both an unconscious and conscious level, must be confronted."

Gobodo-Madikizela says that the Truth and Reconciliation Commission, of which she was a member, was a starting point in the process by opening a space for the narration of trauma, but the task of reparative healing is yet to happen.

"What is needed is a process of transformative dialogue that goes beyond the binaries of victim-perpetrator," said Gobodo-Madikizela. "Secondly, such dialogue should lead to true transformation of lives, transcend not only the traumatic past, but also break the cycles of its transgenrational repetition."

Gobodo-Madikizela's inaugural lecture is one of a three-part series of lectures, Living Reconciliation, co-hosted with the Institute for Justice and Reconciliation.