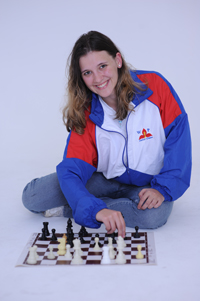 Good move: Laura Irving, chairperson of the UCT Chess Club, winners of the Western Province League for the first time in 18 years.

The UCT Chess Club has won the Western Province League for the first time in 18 years.

Club chairperson Laura Irving notes that they started the season with a bang, moving into first place on the log from the start. Everyone - including the club - thought they were just keeping the top spot warm for the so-called big guns in the league, but they managed to maintain their performances over the season, defeating nine of the 10 other teams.

It is the first time that the club has won the premier division - the top tier in the league - since 1992.

Irving says the club has steadily been increasing in popularity on campus, with the majority of members coming from the so-called hard degrees such as maths and physics.

"We have created a very nice social vibe at the chess club, and everyone seems to enjoy it thoroughly," she says.

The team will be participating in the South African University Championships in December, where Irving will defend her title in the individual female event.