Camaraderie and debate at law reunion 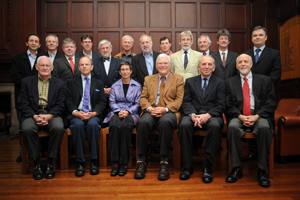 "The most popular part of the annual law reunion weekend is undoubtedly the academy that is held on the Friday afternoon," said dean of law, Professor PJ Schwikkard. "You could have heard a pin drop as Emeritus Professor Solly Leeman took the graduates through the paces of criminal justice again, peppering his talk with references to '... and you will remember, not so ...'.

"Dale Hutchison and Dennis Davis' reflection on the sanctity of delict and contract in the constitutional era sparked great debate that continued over a glass of wine, and spilled over to the dinner the following night," she added. "There was no doubt in our alumni's minds that the standards in their law school are as good, and better, than when they were here."

The special guests were those from the final year of 1960 who were celebrating their 50th reunion. Two of their group spoke to great applause. Richard Wood's presentation on his experience as an attorney in Harare, titled Ice in the Desert: The rule of law in Zimbabwe, was cause for sombre reflection.

Jeffrey Jowell's after-dinner speech was, in contrast, cause for great hilarity; he remembered making contact with his Students' Representative Council counterparts in Berlin, under cover of a masked ball, and setting a pocket alarm clock only to find that the inimitable Ben Beinart took it as a signal to exit the room after only 20 minutes of lecturing.