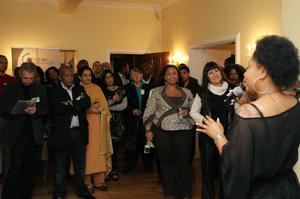 Remember when: UCT alumni and friends gathered at the opening cocktail reception at the US General Consulate, part of the recent Heritage Day weekend arranged by the UCT Association of Black Alumni.

The reunion of UCT's black alumni from the past 50 years - who gathered under the umbrella of the UCT Association of Black Alumni (UCTABA), over the Heritage Day weekend - has elicited several letters from alumni, and received attention in both the Cape Times and the Cape Argus and on CapeTalk radio.

Several alumni have questioned whether there is a place in contemporary South Africa for such a racially selective gathering; and more critically, have asked whether it is appropriate for the vice-chancellor, Dr Max Price, to sanction the establishment of a racially-based organisation that is affiliated to UCT.

Answering these concerns, Price agreed that the UCTABA, an independently-organised group of black UCT alumni, is not uncontroversial. "The existence of the UCTABA will no doubt stimulate a debate, but I believe these are debates we have to have; debates about race and reconciliation."

It was of some concern, he added, that discussions around race issues remained so sensitive and difficult.

"These discussions are often complex, and a purely academic argument is almost impossible. Because our history has such an emotional impact on people's lives, we are not yet at a place where these painful feelings can be divorced from these discussions. There are no easy, off-the-shelf answers, but these complexities make it even more important to continue the debate."

Price said that the association has the support of UCT's Development and Alumni Department, and pursues a particular goal that the university supports strongly.

"UCTABA is not exclusively for black alumni, but for anyone who shares their particular agenda. Their agenda is part of the reconciliation process within UCT," he said.

"UCTABA's existence must be seen in the context of the history of UCT as a white liberal university. As such, UCT fought the apartheid government to be allowed to admit black students to study here. The liberal universities professed non-racialism and anti-racism. Yet black students experienced the UCT environment as racist. In the realm of social activities, from admission to residences to participation in sports and dances, from access to certain facilities to the attitudes of students and staff, there was explicit discrimination."

Price said that this extended even to the academic sphere. For example, in medicine (as testified to the Truth and Reconciliation Commission by past students) black students could not be taught using white patients or observe autopsies on white cadavers, while no such restrictions existed for white students with respect to black patients. Many black students were so offended by this pervasive discriminatory treatment that they refused to attend their graduation ceremonies.

"Many of these alumni say they appreciate the opportunity they had to study at UCT, because of the opportunities it opened up for them which they could not otherwise have had, but that they were glad to be out of UCT as soon as they had finished. They recall their experience with some bitterness. They wanted to have nothing more to do with the university."

He said that for some 12 or 13 years after 1994, and in spite of the fact that UCT had been led by two black vice-chancellors, UCT's black alumni were absent from most reunions and alumni events, and from participating in the life of the university as members on convocation.

Two years ago a group of black alumni who graduated in the 1970s and 1980s got together to talk about their experiences as students and about how to deal with the hurt they still felt. These alumni debated whether they needed to continue isolating themselves from UCT, and what reconciliation would require.

They had identified a need for a forum where they could talk about their experiences, and share them with other, younger black alumni, some of whom (even in the post-1994 era) experienced UCT as an alienating environment.

"These alumni concluded that the time had come for them to become part of UCT, to identify with and own their university and to contribute to the transformation of UCT, especially through recruiting, mentoring and funding black students from disadvantaged backgrounds.

"They founded UCTABA and have been successful in bringing many disaffected black alumni back to UCT. These alumni have become active in engaging with the university and its projects. Very importantly, they have made a commitment to promote philanthropy among the new black middle class of which they are a part. Their commitment is admirable, and they serve a much-needed reconciliatory agenda."

Price added: "I have no doubt that there will come a time when black alumni feel sufficiently a part of UCT's past, present and future, and are represented in sufficient numbers in convocation for their voice to be heard. Then UCTABA will have no further reason to exist and will dissolve.

"We work hard to create a bond with all UCT alumni and we feel privileged that our alumni are growing in diversity, not only in terms of race but also in terms of socio-economic background, geographical origin and current base and nationality."