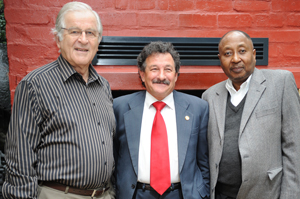 UCT's R3.5 million investment in combating crime and grime and dealing with the complexities of homelessness in surrounding areas took physical shape on 1 September with the first deployment of security patrols and cleaning staff taking to the streets.

This was the public launch of the

UCT is also a founder member and donor to the Groote Schuur Community Improvement District (GSCID) which aims to deal with neighbourhood crime, grime, transport and housing problems that are faced by students, residents and businesses in the area.

, a project four years in the planning, with the aim of cleaning up the business areas (and later, residential areas) bordering Main Road, from the South African Breweries in Newlands to Anzio Road in Observatory.

The new cleaning crew is provided by Straatwerk Ophelp, who provide rehabilitation and job creation for the homeless. After a tender process, Orbis Security Solutions were appointed to provide the new security patrols.

Speaking at the launch function, Antony Davies (CEO of the GSCID) thanked UCT for its "massive investment" in the pioneering project.

"This unique partnership shows the value that UCT places on good neighbourliness," said Davies. "It also shows a commitment to addressing the crime and grime concerns of the community."

Deputy vice-chancellor Professor Thandabantu Nhlapo said the project was of immediate interest to UCT, because although crime has been lowered significantly on campus, the crime problem in its peripheral areas has resulted in the murders of UCT students and staff.

"Occasionally it's my job to announce a death to relatives, and believe me, you don't ever want to do that. It's the most gut-wrenching thing to do."

UCT is also upgrading the GSCID offices in Shell Court, Mowbray "as part of UCT's commitment to urban renewal," says John Critien, executive director of the Properties and Services Department.

"The university is very serious about the upliftment of the area it serves," said Critien. "We want to be a part of real change."