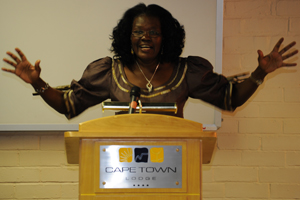 Winds of change: Prof Catherine Odora-Hoppers addresses student leaders at the inaugural African Student Leaders' Summit. The summit was funded by a grant from the Vice-Chancellor's Strategic Fund.

Professor Catherine Odora-Hoppers, who holds the Chair of Development Education at the University of South Africa, does not mince her words, and her talk at the start of the inaugural African Student Leaders' Summit set the tone for the five-day programme. (See lead article on page 1.)

Odora-Hoppers, a prominent scholar and policy expert, warned student leaders from around the continent that networking alone wouldn't resolve Africa's problems. They also need a shared commitment to fix things.

The first level of leadership is in thought, she said, "and good thoughts contain good actions". Authority, Odora-Hoppers continued, is not about "having a gun stuck in your waist", but in demonstrating it, and acting in the interest of all humanity.

Turning to her topic of the day, The United Nations and African Millennium Goals: How education can be developed to include traditional knowledge, Odora-Hoppers spoke of what she termed the "gross disparities and intensifying of the north-south divide". Neocolonialism, "an ulcer that meets Africans in all corners", is not only active, but is maintained and is deepening.

"These things did not just happen because God said so. They happened from a careful and systematic strategy of aligning human resources, land and mindsets. Eighty-six countries serve the people of Europe, not because they are smart, but because of a system of organised violence dressed up as progress."

Odora-Hoppers said African society had lost out completely in the collapsing of all other forms of learning and education systems into one education system, the Western model, collapsing this further into the "narrow process" of schooling.

"The neo-liberal paradigm has now provided the practical tools for the final burial of African society."

But it's not all doom and gloom.

Odora-Hoppers said China, India, South Africa and Brazil are forming a new front to push for a new agenda in the transformation of global relations.

"There is a new episode in global relations and you will be part of that drama," she told students.