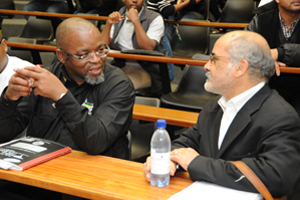 Right direction: Gwede Mantashe chats with DVC Prof Crain Soudien before talking on the role of students in the future of the state.

ANC secretary general Gwede Mantashe lashed out at universities' decision to tighten their admission policies next year, describing the new requirements as "artificial and tools of exclusions".

In his visit to UCT on 19 August, Mantashe noted that the point system of admission does not consider the learner's environment, and looks only at the points, a system that favours learners from former Model C schools.

"My view is that anybody who is not insane can be taught anything," Mantashe explained.

Mantashe was welcomed by deputy vice-chancellor Professor Crain Soudien before addressing the UCT Progressive Youth Alliance (on-campus branches of the ANC Youth League, the South African Student Congress and the Young Communist League) on the role of students in defining their institutional space and direction within the context of a developmental state.

Mantashe said the big issue in South Africa is for the state to identify centres for growth, and direct state resources to them.