Teacher's dedication takes her to the stars 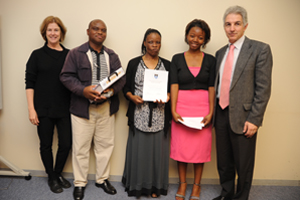 This year's Stella Clark Teacher's Award winner Nompilo Jojo's contributions as a high school mathematics teacher could probably be summed up as making the unthinkable possible.

At Clydesdale Senior Secondary School in the rural Umzimkhulu town of KwaZulu-Natal, Jojo must, at times, deal with hungry learners who don't like maths, and who lack the proper foundation for the subject. And she has to find solutions. "When you are building a house, you can't put blocks in the air. You must put other blocks where you feel there is air," she explained in her award-acceptance speech at UCT on 3 August.

Described by principal, Vangeli Gamede (a UCT alumnus), as the pillar of the Clydesdale school, Jojo's weapons for success are patience, sacrifice and motivation. She was nominated by first-year medical student Nondumiso Ngubo, who spoke of how she and her classmates were able to catch-up following a month-long teacher's strike, thanks to Jojo.

"She kept on encouraging us to never underestimate our abilities," Ngubo said. "With her help, we were able to obtain good results."

Jojo became the fifth recipient of the award, and was presented with a monetary prize, as was the school and Ngubo. The school also received an educational resource pack.

The award is made in remembrance of the late Stella Clark, who was a senior lecturer in the Language Development Group in the Centre for Higher Education Development until her death in 2005. The award was established through donations from her family, friends and colleagues from South Africa, the UK, the US and Japan.

As vice-chancellor, Dr Max Price, put it, the accolade honours teachers "who have inspired their learners to think outside the box and gave them a scaffolding to come to UCT". Max said the award was also a way for UCT to establish networks with the school, and hopes teachers would encourage learners to come to UCT.