It was Pelé versus Mandela at UCT 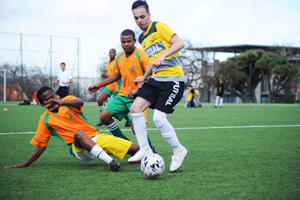 Great goals and nimble soccer tricks marked an entertaining football clash that capped a long programme to spread word of the true essence of the great Brazilian legend Pelé among rural and township South African youngsters.

The six-a-side exhibition game on UCT's FIFA-accredited artificial soccer turf on 6 July pitted teams representing Pelé (Team Pelé) and his long-time buddy Mandla Mandela (Team Mandela), the grandson of Nelson Mandela, against each other. The match was the culmination of Finding Pelé, a journey of Futebol bonito (celebrating football) to unearth young players that represented true passion and love of the game.

Team Pelé was assembled during a road-trip around South Africa, in which up-and-coming young footballers from poor communities were selected. "They have so much talent yet they have nothing," explains Finding Pelé organiser Tim Fornara. The youngsters were led by professional soccer players Adam Merzougie, formerly of Chelsea Kicks team in the UK; and Craig Dobson, who has played for various teams, including the Jamaican international team, Crystal Palace and the MK Dons.

Team Mandela was made up of players from Mvezo FC, a soccer club from Mandla Mandela's village in Mthatha. 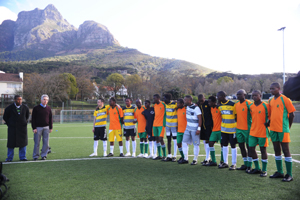 The tour, funded by Pelé's company, Pelé Sports, was the first leg of a four-year international journey, during which Team Pelé will travel the world, visiting and assisting communities in need of coaches, merchandise and infrastructure as a way of "giving back"

A documentary of the journey is being shot, and the initiative is set to be wrapped up just before the next Soccer World Cup, in Brazil in 2014.

Handing out certificates of participation to players, UCT vice-chancellor, Dr Max Price (pictured on the left with the teams), said the university was excited to host the initiative, wishing the crew the best of luck on their world trip.

UCT hosted the event as part of the university's commitment to add value to the City of Cape Town's World Cup activities, and to boost UCT's football profile.