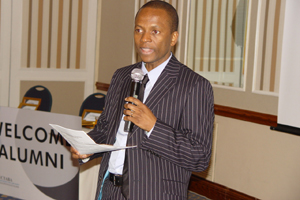 UCT's Association of Black Alumni (UCTABA) has raised R250 000 in their R1 000 for R1 Million fundraising campaign, announced founder member Justice Lithuli at a forum in Sandton on 24 May.

Launched in 2009, the campaign calls for 1 000 alumni to contribute at least R100 per month for a minimum of one year. All the money raised will go towards bursaries for black students. The goal is to raise the remaining R750 000 by the end of 2010.

"We believe that financial burden is one of the main reasons why black students drop out or do not thrive at university," said Lithuli. "As black alumni, we have a duty to give back and contribute to this campaign."

Pulling no punches, he looked at why BEE had not achieved its transformation objectives and what should be done to ensure that it does its job in the long term.

Zungu argued that corporate SA remains resistant to implementing it.

"South Africa is simply not patriotic," he said. According to Zungu, they will always take the minimalist approach, which will have dire consequences for the economy in the longer term.

He said that BBEE needs to be linked more firmly to economic growth and that until we see a normalisation in the numbers of black business listed on JSE '“ currently only 4% - and black, female and disabled managers at all levels in organisations, the job of BBBEE will remain incomplete.

"We need to elevate the discussion," he said. "We must take out emotions and plug the research gaps so that we can make decisions that are not subjective."