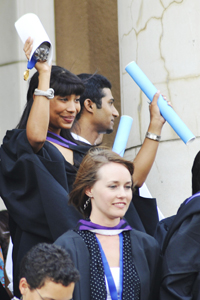 On the job: There is good news ahead for students graduating in 2010.

South Africa's leading employers are set to increase the number of vacancies for university graduates by 17% next year, new research reveals.

The SAGRA Graduate Recruitment Survey 2010 also alleviates some graduates' fears over starting salaries. Nearly two-thirds of employers expect to increase graduates' salaries, based on cost-of-living increase. No organisation in the survey is planning to reduce graduate salaries moving into 2011.

The survey was conducted by High Fliers Research, a specialist graduate-research company, on behalf of the South African Graduate Recruiters Association (SAGRA) in April. Seventy of the largest and well-known graduate employers in South Africa took part.

The increase in vacancies is set to take place in nine of the 12 sectors that are tracked, including the accounting and professional services firms, which are the largest recruiters of graduates. The commercial banks are set to up their intake by 20%, while, sadly, the mining and oil companies, also big recruiters, are set to decrease their vacancies for graduates by 16%.

Cathy Sims, national co-ordinator for SAGRA, who is also an acting director for the Career Development Program at UCT, is pleased about the latest findings.

"It is very positive to see so many major employers remaining committed to bringing quality graduates into their organisation, and increasing the number of vacancies they have for next year," she said.

"Graduate recruitment is clearly a key part of these organisations' recruitment strategy, and building a strong pipeline of high-calibre graduates remains a critical feature of their future talent pool."