Second round for chancellor Graça Machel 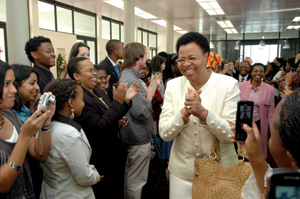 Applause: Chancellor Graça Machel receives a warm welcome at Graça Machel Hall, the women's residence to which she lent her name in 2008.

Graça Machel, listed in the annual Time 100 issue (Time May 10, 2010) as one of the world's most influential people, has been elected unopposed as chancellor of UCT for a second term. Her name was the only one put forward following the call for nominations for the office, which closed on 31 March. Her new term of office will end in 2019. She is the fifth chancellor of UCT since the South African College became the University of Cape Town in 1918.

The chancellor is the titular head and representative of the university, and confers degrees in its name. Machel is passionate about education and its role as a catalyst for growth in the developing world. Her passion for education and her position as a continental figure strengthen the university's mission to give Africa a stronger voice - through education, research and academic knowledge - in international affairs.

Machel has challenged UCT students and academics alike to use education and research to improve the world they live in. She acts as a role model, especially to women students, reminding them that the struggle for justice is not over until women and children in the developing world have the rights and means to choose a better future for themselves and their families.

Through the Graça Machel Scholarship Programme, for instance, she empowers women in Southern Africa and equips them to take up leadership positions in their communities and nations and on the continent on which they live. She speaks all over the world for the rights of children, families and communities in disadvantaged areas.

During her first term as chancellor, Machel accepted the position of life president of the Students' Health and Welfare Centres Organisation, which provides opportunities for students and staff to contribute to the development of disadvantaged communities in Cape Town. She also allowed her name to be used for the women's residence that was opened in 2008.

Machel has used her influence to improve literacy and schooling, and to address the plight of needy children, in Mozambique, her native country. For the first 11 years of the post-independence Mozambican government, beginning in the 1970s, she served as minister of education and culture. During her first five years in office, the country's illiteracy rate dropped by a remarkable 22%, and the school-going population increased from 400 000 to 1.6 million.

In 1994 she was appointed to head a study on the impact of armed conflict on children for the United Nations Children's Fund (UNICEF). Her report led to the recommendation to approve a special representative of the UN secretary general dealing with children in armed conflict. Machel is now a goodwill ambassador for UNICEF, chairperson of the National Organisation of Children of Mozambique, and president of the country's UNESCO commission.