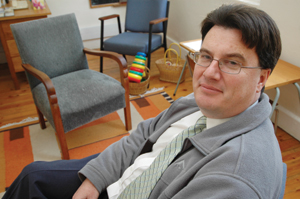 Farewell: UCT's Prof Alan Flisher has died at the age of 53.

Professor Alan Flisher, head of the Division of Child and Adolescent Psychiatry in UCT's Department of Psychiatry and Mental Health, died of leukemia on the morning of Sunday 18 April. He was 53.

Flisher held no fewer than seven degrees from UCT, including an MSc in clinical psychology, an MBChB, an MMed in psychiatry, an MPhil in child and adolescent psychiatry, and a PhD in psychiatry. He also held a Diploma in Child Health and a Fellowship of the College of Psychiatrists from the Colleges of Medicine of South Africa.

He joined UCT in 1998 in a joint appointment with the Provincial Administration of the Western Cape. He was the first incumbent of the Sue Struengmann Chair in Child Psychiatry and Mental Health.

His principal academic interests were adolescent health and mental-health services research. He has served as principal investigator for a number of school-based epidemiological and intervention studies that addressed a range of aspects of adolescent risk behaviour including substance use, violence and unsafe sexual behaviour.

Flisher had made many telling contributions as a scholar, says Professor Dan Stein, head of the Department of Psychiatry and Mental Health. As the first incumbent of the Sue Struengmann chair, he strengthened public and community perspectives on child health; he bolstered patient services in a number of areas; and he guided dozens of senior students through their work.

"Alan was a giant in African child and adolescent psychiatry," said Stein.

He also conducted extensive policy development consultancies, both nationally (for the South African Department of Health) and internationally (for the World Health Organisation and the United Nations Compensation Commission). At the time of his death he was the director of a large study of Mental Health policy development and implementation in Ghana, South Africa, Uganda and Zambia.

He had held visiting appointments at Columbia University, the University of Oslo and Harvard University.

"In Professor Flisher, UCT has lost a fine scholar whose work clearly demonstrated a deep concern for the plight of children and adolescents in South Africa and beyond," said UCT vice-chancellor Dr Max Price. "He also served on several UCT committees, including UCT Senate and the Senate Executive Committee.

"He was not just an outstanding academic, but also a modest, gentle and generous person who will be sorely missed."

Flisher is survived by his wife, Mehrunisa; their nine-year-old twins, Adam and Khaleila; and his stepsons, Sirhan and Zubin.