Competition is manna to budding mathematicians 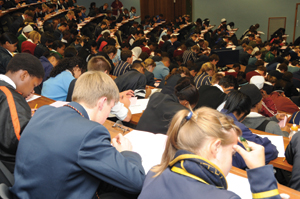 The UCT Maths Competition, attended by thousands of high school learners on 20 April this year, brought back fond memories for Dr Mark Berman.

As a high school learner Berman, now a maths lecturer at UCT, took part in the competition every year, and finished in the top three from grade 8 to grade 12.

"I was quite competitive then, but what matters to me now is how the competition stimulated me to develop my mathematical skills," he said.

Berman still believes that the event is a wonderful way to get young school-goers interested in maths, "and it certainly played a big role in leading me to the career path that I eventually chose".

Many of the learners, who came from as far as Citrusdal, Vredendal and Worcester to compete individually or in pairs, agreed with him.

Jaco du Plessis of De Kuilen High School in Kuils River was participating for the third consecutive year, having finished 11th and 17th in the past two years. This year he aimed to break into the top 10 and win a gold medal.

But for Xolisani Jikijela from Pinelands High School, taking part is a path to UCT, where he is keen to do a degree in actuarial science next year.

Event director Professor John Webb of the Department of Mathematics and Applied Mathematics (with strong support from the Faculties of Science and Engineering & the Built Environment), said the competition, which popularises mathematics in high schools, ran as smoothly as ever.

Webb, who has been organising the event since UCT took it over from schools in 1980, remembers that apartheid forbade black and white schools from visiting one another, but the university's involvement allowed all to participate.

He noted that participant numbers have swelled from about 3 000 in 1987 to over 6 000 this year; a clear indication that learners love the competition, as its approach is different to that of a classroom setting.

"They get to develop their maths skills in a different way," explained Webb.