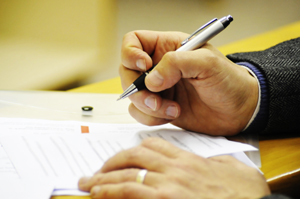 The salary negotiations between management and the UCT Academics' Union (UCTAU) have been concluded.

There were four significant elements to the agreement.

In the first place, negotiators reached settlement on the actual salary increases for academics for 2010. This agreement will now be implemented.

Secondly, the agreement commits UCT to addressing a range of issues relating to conditions of service of soft-funded academics/research staff (SFARS). This process will take place within particular agreed frameworks, principles and timelines.

Thirdly, consensus was reached that wage negotiations for 2011 would begin in April this year, in order to have a clear indication of what the salary bill will be before the 2011 budget process begins.

Finally, the agreement commits UCT to a review of the university's remuneration policy as it applies to academics.

In a communiqué to academic staff, vice-chancellor Dr Max Price said: "I am most eager to develop a platform of trust with the UCTAU, and to ensure we have ? on both sides ? considered and understood the changed environment; including the fact that we will, as management and union, be negotiating rather than consulting, and what the prospect of industrial action by academics would mean in our environment.

"I am committed to working through these issues with the UCTAU and the other unions representing staff on campus."