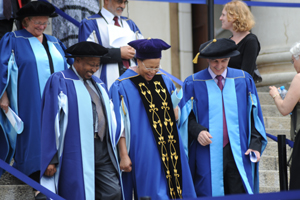 Graça Machel (middle), UCT's fifth chancellor, is eligible for re-election and has indicated her willingness to accept nomination.

The Office of the Chancellor is vacant following the end of incumbent Graça Machel's first term.

However, she is eligible for re-election and has indicated her willingness to accept nomination as a candidate for a term from 2010 to 2019.

All members of Convocation, all staff and all students are invited to nominate candidates for election to this office.

Nominations in writing must be signed by at least 20 but not more than 30 people, and must be accompanied by a written acceptance of nomination by a candidate and the candidate's statement, not exceeding 200 words, summarising their curriculum vitae and candidature.

The chancellor is the titular head of the university and presides at all congregations (graduation ceremonies), and confers all degrees and awards all diplomas and certificates in the name of the university.

Until Oppenheimer decided to retire, after 29 years in office, the chancellor held office for life. At that stage a change was made to the statute; a chancellor could be elected for a 10-year, renewable term of office, and by an electoral college rather than by a vote in Convocation. Machel was the first to be elected under the new dispensation.

The closing date for nominations is noon on Wednesday 31 March 2010. Please note that the election process is set out in detail on UCT's website. If more than one nomination is received, an electoral college will be constituted to choose a chancellor.

Nominations are to be sent to: The Registrar, University of Cape Town, Private Bag X3, Rondebosch, 7701. Scanned copies of nominations may be sent to Registrar on condition that the originals are also received by the due date of 31 March 2010.