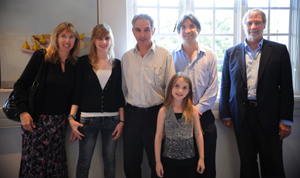 In recognition of his contribution to welfare-related research, Professor Dan Stein, head of UCT's Department of Psychiatry and Mental Health, was awarded the prestigious Alan Pifer Research Award at a function on 24 March.

The annual award honours UCT researchers whose welfare-related work has contributed to the advancement and welfare of South Africa's disadvantaged people.

Stein's research focuses on the psychobiology and management of anxiety disorders, including posttraumatic stress disorder and obsessive-compulsive disorder. His work ranges from basic neuroscience all the way through to epidemiological and cross-cultural research.

Stein and his colleagues recently undertook the first nationally representative epidemiological study of mental illness in Africa. This research lead to the key finding that although there is significantly more impairment associated with mental illness than with physical disorders, mental disorders are less likely to receive treatment.

With his team, Stein has also conducted some of the first research on mental disorders in patients with HIV/AIDS, and how, with short questionnaires, these disorders can be rigorously screened.

Stein is also the director of both the Medical Research Council's Unit on Anxiety & Stress Disorders and UCT's Brain-Behaviour Initiative.

In receiving the award, worth R10 000, Stein expressed his passion for his field: "The brain is the sexiest and most challenging of organs, and psychiatry is so rewarding because it is the medical speciality that's most interested in people."

Stein also thanked his family, who attended the function. "They forgive me for being a workaholic, and they also keep me sane," he said.