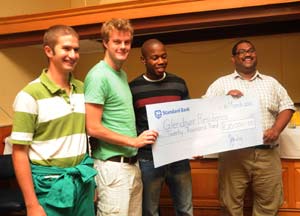 Taking a shower instead of a bath and heating up a geyser once a day were among measures that helped Glendower Residence win the inaugural Eskom Residence Energy Challenge.

So said Tawanda Gora, the residence's house committee representative for maintenance and security, at the competition's prize-giving ceremony on 16 March.

The committee also encouraged students to switch off laptops and electrical appliances when not in use, reports Gora. Students and residence staff bought into the idea, helping Glenres, as that residence is affectionately called, beat seven other residences to win the R20 000 first prize. Half of the money will be used to improve electrical connections in the residence to cut back on energy use and help the residence to defend its title, Gora adds.

The competition was organised by the Green Campus Initiative (GCI), in partnership with Eskom, to reduce energy consumption over a period of four weeks late last year. GCI member Jeremy Pitman says the contest was judged according to four categories, such as daily energy usage per person, as well as the overall energy reduction achieved. Glenres was a clear winner in all categories

As a baseline for the competition, the GCI collected energy-usage data before and during the challenge. This year GCI intends to include all residences in the event and create more awareness on energy saving.