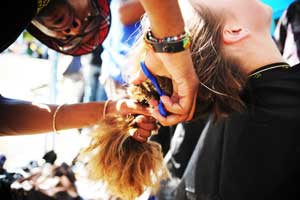 New look: It was a case of now you see it, now you don't, as students and staff took part in this year's CANSA Shavathon. In this picture and below, Simisani Moyo (CSC) cut and shaved Kaitlyn Crawford's hair.

UCT students and staff braved sweltering heat as hair was snipped and sprayed and cropped and coloured at the annual CANSA Shavathon on 5 March. All for a good cause, as all funds will be donated to the Cancer Association of South Africa (CANSA).

But this year's event also took a different direction with the Commerce Student Council (CSC) joining Kopano Residence - usually setting the pace - to organise it. And it was moved from the residence to the Jammie Plaza to pull more students and raise more money. And it paid off. 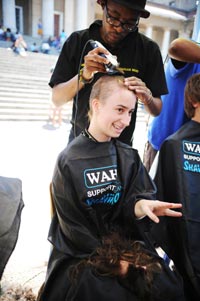 "Last year we raised about R2 000, and this year we increased that to R9 600," said a jubilant Lungelo Gumede, Commerce Student Council 2010 chairman. He said the intention was also to bridge a gap between the upper and the lower campuses in terms of student activities, and they hope to, by next year, get more residences and faculties to join.

Gumede said shaving is a symbolic act and shows that people don't care about image, and more about what's inside the person. He thanked participants, saying "united we showed that UCT cares about the cancer pandemic and hope that there will be a cure for it one day, and that that day is soon".