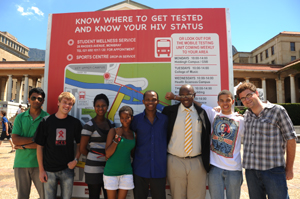 Some UCT students are still indifferent to and surprisingly ignorant of the dreadful HIV/AIDS pandemic, despite the fact that millions of South Africans are infected and affected by it, according to the Students Representative Council.

To compound the situation, the estimated 10% of students living with the virus are subjected to stigma by certain fellow students.

For these reasons, the Students' Representative Council (SRC) has put HIV/AIDS on their priority list for the year, and on 24 February its members "led by example" and went for voluntary counselling and testing during a Student Wellness Services' drive at Jameson Hall.

The three-day campaign was one of the two that the Wellness Services hosts each year - in addition to the daily services available at the Sports Centre and the Student Wellness Services - to promote testing, and to make it available and easily accessible to staff and students.

Sizwe Mpofu-Walsh, SRC president, said that the SRC would be running a campaign on HIV/AIDS later on in the year, and the first thing to do was for members to be tested publicly and act as role models to students who are afraid.

Michell Mpike, the SRC member responsible for health, safety and security, said that testing is important for promoting responsible living.

"There are a lot of people who are ignorant about HIV," she explained. "There is also the mentality that 'it won't happen to me'."

While the turn-out was "overwhelming", the process itself can be nerve-wrecking, as one student attested.

"I was scared when I came to test for the first time because you never know what will happen," she said. "But testing is a responsible thing to do in order to make informed decisions about your future."