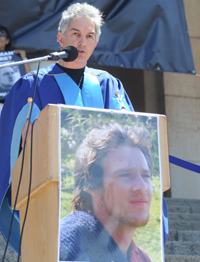 Speaking out: Dr Max Price addresses students and staff at the Dominic Giddy memorial service and march on 22 February.

A cash reward of R50 000 is being offered for information leading to the arrest and successful conviction of the killers of UCT third-year student Dominic Giddy (21), who was stabbed to death on the corner of Main Road and Kotzee Road in Observatory at about 00h30 on Saturday 13 February.

Giddy and two friends, also UCT students, were attacked by three men as they were walking to their digs nearby. The three attackers drove away from the scene in a motor vehicle.

If you have information that you think may assist the police in apprehending the killers, please contact Detective Constable Petersen of the Woodstock Police Station on 021 486 2840 or 084 019 7467.

On 22 February UCT held a memorial assembly and march to protest the levels of violent crime in the surrounding areas. Two students have been murdered in the Observatory area in the past five months. 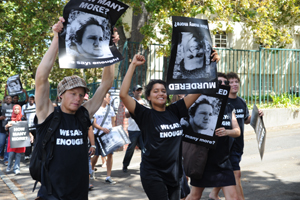 In addition, an email address, wesayenough@uct.ac.za, has been established for members of the UCT community to send pledges of support.

At the memorial assembly, vice-chancellor Dr Max Price also urged the UCT community to add the Crimeline number, 32211, to their cell phone contacts list, making it part of the university's campaign against crime.

(A transcription of the vice-chancellor's address may be downloaded from here, and footage of the march can be viewed on YouTube and a podcast from here)