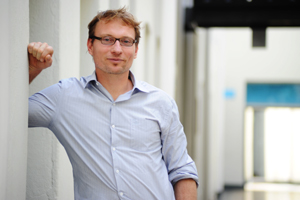 Associate Professor Ralph Hamann, research director at UCT's Graduate School of Business (GSB), was one of the authors of the winning case study (netting the top prize of R40 000) in a competition held by the University of Stellenbosch Business School's Unit for Corporate Governance in Africa.

Titled A Clash of Cultures (and Lawyers): A case study of Anglo Platinum and its Mogalakwena mine in Limpopo, South Africa, the study was co-authored with Leanne Farrell and Eric Mackres, master's students from the Massachusetts Institute of Technology, who were visiting students at UCT's African Centre for Cities. At the time of writing the study, Hamann was a senior researcher at UCT's Environmental Evaluation Unit.

The competition was sponsored by London-based Hermes Equity Ownership Services, and called for much-needed case studies from Africa on corporate governance. It attracted about 100 proposals from various African countries. Eleven proposals were shortlisted, and 10 full cases were developed. Each of these submissions received R10 000 from the competition as a contribution to their development.

"If we had not received this initial research grant, it would not have been possible for Leanne and Eric to travel to Johannesburg and Mogalakwena in Limpopo for on-site research involving numerous interviews with company personnel, community members and others. It also meant that the case could be written without financial support from the company, which ought to increase its objectivity," said Hamann.

The case studies were submitted to an international panel of judges comprising Stephen Davies of Yale University and Professor Ollie Williams of Notre-Dame University in the US, and Professor Jean-Louis Schaan from the Richard Ivey School of Business in Canada.

The winning case has received significant attention. It is listed on the website of the Business & Human Rights Resource Centre, a global NGO that tracks the environmental and social impact of companies worldwide.

Hamann is also the recent recipient of the Hiddingh?Currie Award for his co-edited book, The Business of Sustainable Development in Africa: Human rights, partnerships and alternative business models.

(The winning case study, along with other competition entries, can be downloaded free from here.)