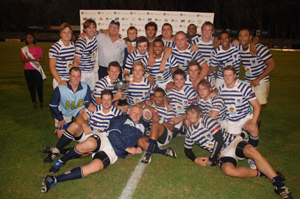 Victors: The FNB UCT team with the Monte Taljaard Trophy, presented by the late Monte Taljaard's father, Sydney (in picture) after the team beat NMMU 65-9. Monte was a talented UCT flanker who died in a car accident in 2008.

Not only was Ledwige part of a memorable victory - the Tigers crushed NMMU 65-9 - but he found himself the first recipient of the Monte Taljaard bursary.

This fixture doubles up as the annual Monte Taljaard Trophy match between UCT and NMMU, and is played in honour of the late UCT flanker Monte Taljaard who died in a car accident in 2008. Taljaard was born and raised in Port Elizabeth and his father, Sydney, was on hand to award the trophy to the victorious Ikey Tigers.

Head coach John Dobson said he felt the FNB UCT side had produced a performance that honoured Taljaard, especially in the second half.

"This, for us, was what it was all about," Dobson told varsitycup.co.za.

The coach was "even happier" with other aspects of the Ikey Tigers' performance. The team now lies in second place on the log and, along with the Maties, is the only other unbeaten side in the 2010 Varsity Cup, scoring nine tries to nil in their third successive win over NMMU.

UCT drew with Free State University's Shimlas in the opening game, then saw off North West University by 18-11 on 8 Febraury.

"At one stage, with 'Hurricane Edna' looming in the build-up to the game, we thought that we might be in for a very long night at the office, but we managed to find some rhythm eventually, and I was happy with the end result," Dobson added.

"To get a result like that with some frontliners resting was great, but last night for us was not about the result... (but) rather about something far more fundamental."

Next up on the Varsity Cup fixture list for the Ikeys are the Tshwane University of Technology's Vikings at the Green Mile today, February 22 (kick-off 16h30), in a Round Four clash.