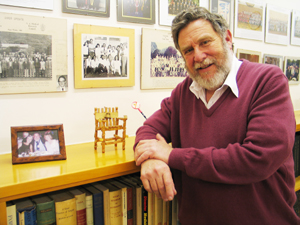 Creative mind: The late Emer Prof Ralph Kirsch was a recipient of the South Africa Gold Medal, one of very few medical doctors to receive this prestigious science award.

Emeritus Professor Ralph Kirsch, a pioneer of liver research and medicine, died on 9 February after a battle with cancer.

He was a leading academic and administrative figure in the world of medicine and scientific endeavour in South Africa, Africa and beyond.

Vice-Chancellor, Dr Max Price, said Kirsch was an icon in the medical profession, enjoying a brilliant career as a clinician, scientist and teacher.

"Professor Kirsch made a huge contribution to the field of medicine over many years, through teaching, research and participating in professional structures.

"He had a great love of science, which he pursued with hard work, indefatigable optimism and seemingly limitless energy. He was also a huge champion of transformation and was responsible for mentoring many black clinicians and academics.

"Professor Kirsch served UCT well over many years and in many different capacities. Although retired, he was a Convocation member of Council. He was an alumnus of whom we can be very proud.

"He will be remembered with great fondness by all who knew him, including colleagues and former students. The university extends its condolences to Prof Kirsch's widow, Beverley, and his sons David, Richard and Derek, and their families."

Dean of the Faculty of Health Sciences, Professor Marian Jacobs, said: "Professor Kirsch was a brilliant and caring doctor, scientist, teacher and mentor to many. He was leader in academic medicine, health care and scientific endeavour in South Africa and beyond, and his wisdom and leadership will be sadly missed."

Professor Peter Meissner, head of the Division of Medical Biochemistry in the Department of Clinical and Laboratory Sciences, added: "His career as a clinical scientist, a basic scientist, educator, academic, mentor and leader in various capacities were possibly without equal in the current era."

The son of a fruit farmer from Wolseley, Kirsch was born in 1940 and schooled at Rondebosch Boys' High School before registering to study medicine at UCT. He obtained his MBChB in 1964, his MD in 1968 and a DSc in Medicine in 1993.

A highlight of his career was creation of one of UCT's first Medical Research Council units, the MRC Liver Research Group, formed in 1973 and co-directed by Dr Stuart Saunders and Professor John Terblanche. Kirsch took over from Saunders when he left to perform his "tightrope" duties as vice-chancellor.

The awards Kirsch counted most dear were his Distinguished Teacher Award (1982, when he was one of the first three recipients) and his UCT Fellowship (1983).

For his lifetime contributions to medicine and science in South Africa he received many - and varied - honours. Among Kirsch's highest accolades was the South African Gold Medal, awarded to him in 2005 by the Southern African Association for the Advancement of Science.

A hallmark of his career was a love of research. As a schoolboy he once asked his maths teacher: "Sir, can't you do it another way?" to which his maths teacher replied: "Kirsch, elephants shouldn't try to fly."

Among his research interests were porphyria and cardiovascular and immune dysfunction in liver disease. His academic contributions also included more than 500 papers (12 of his papers have more than 50 citations). He was a legendary mentor, training over 20 PhD researchers in 30 years.

"He had an extraordinary ability to understand and identify with another's frame of reference, culture, ambitions and intellect. He was unstinting in his support and enthusiasm for our ideas, research, ideas, hopes and dreams," Meissner said. "He was a mensch in every fibre of his being."

The Faculty of Health Sciences will be hosting a memorial service for Professor Ralph Kirsch on Tuesday, 16 February at 17h30 in the New Learning Center Lecture Theater, Anatomy Building. For more information contact