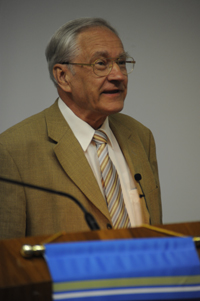 Nobel Laureate Richard Ernst had his work cut out for him when he delivered UCT's first Vice-Chancellor's Open Lecture for 2010 on 1 February.

His audience was something of a mixed bag, ranging from attentive school learners to lay scientists to knowledgeable colleagues. So in his often-humorous lecture, titled Fascinating Insights in Chemistry, Biology and Medicine by NMR and MRI, Ernst, joint winner of the Nobel Prize in Chemistry in 1991, had to run the gamut as he ever-so-modestly explained his own contributions to the development of nuclear magnetic resonance (NMR) spectroscopy – said to be the most important instrumental measuring technique in chemistry. This in turn led to the development of magnetic resonance imaging (MRI), the biomedical instrument widely used today to perform non-invasive diagnoses of the human body.

So Ernst delved deep into the 'basic' science that underpins the technology – particularly the early efforts by his group to boost NMR's sensitivity, to allow it to identify more chemical substances than it could initially. He also related the uses of NMR and MRI in a host of scientific fields, including the 'fingerprinting' and 3D imaging of molecules, the study of molecular dynamics, the probing of Mad Cow Disease, the detection of brain tumours and, with a medical-imaging technique known as angiography, exploring the insides of blood vessels and organs of the body.

"I hope that I have convinced you that magnetic resonance imaging is an irrefutable testimonial to the enormous value of basic research," he said.

Ernst then dedicated the final part of his lecture to the more social aspects of science. Society's ills, he said, are not the result of a lack of science.

"Our lack is a lack of foresight, a lack of responsibility, a lack of public spirit. That is what we need to solve the problems of the world."

In illustration, he showcased some of the work done by him and others at EidgenÃ¶ssiche Technische Hochschule (ETH, or the Swiss Federal Institute of Technology) in Zurich, where he is a professor of physical chemistry, to promote science among the general public.