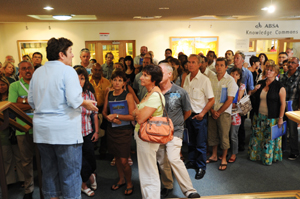 Campus tourists: Parents of the first-year students were taken on a library tour as part of Parents' Orientation.

Parents burst into laughter and nodded in agreement when Professor Paula Ensor informed them of the three Ls - lectures, library and Long Street - their children could choose from when at UCT.

The dean of the Faculty of Humanities' message at the Parents' Orientation on 23 January not only amused the parents who had packed into the Beattie Building lecture theatre, but it seems it will also help them to guide their sons and daughters.

"I loved that statement very much because it clearly summed up the options our children have when they start their varsity life," said parent Nomathemba Mkula.

Mkula she was happy that most of the questions she had had been addressed, and knows the avenues she could follow if she had further concerns.

Llewellyn Cassells, another parent, echoed Mkula's sentiments, and said the orientation sessions were "informative and the staff approachable".

A range of activities, including information stalls, talks and tours, were organised to welcome parents of locally based first-year students, and to familiarise them with the university and the environment their children will experience over the next few years. 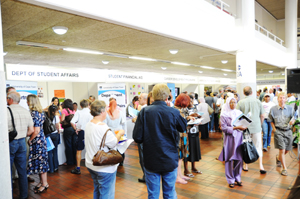 The parents were also told about services that UCT offers, such as financial aid, health and transport.

Vice-chancellor Dr Max Price explained to parents why UCT is a world-class university, adding that they have made the right choice in sending their children here.

He said their children have "enormous" responsibilities and opportunities to influence the future of South Africa.

"I urge you to encourage your daughters and sons to take the opportunities that are available, so that when they leave UCT they don't only possess degrees but are also equipped with socially responsible leadership skills," he said.

Students' Representative Council president Sizwe Mpofu-Walsh promised parents that their children would be supported in all their activities, but advised parents to keep a close eye on their offspring in the first few months.

"If they (freshers) can succeed in the first two months, they are likely to go all the way."

View photo album of the event.