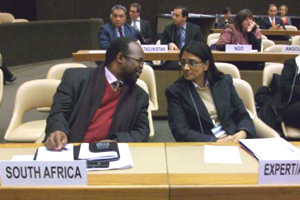 Swiss watch: Fatima Khan (right), with Bethwell Tiba, South Africa's permanent representative of humanitarian affairs with the United Nations, at the latest meeting of the High Commissioner's Dialogue on Protection Challenges, which took place in Geneva in December.

Fatima Khan, director of the Refugee Rights Project at the UCT Law Clinic, has just returned from Geneva, Switzerland, where she took part in the 2009 High Commissioner's Dialogue on Protection Challenges.

The Dialogue series was started in 2007 by the United Nations' High Commissioner for Refugees (UNHCR), AntÃ³nio Guterres. The meetings would be made of a succession of informal discussions on global protection issues, involving states, academics, non-governmental organisations and other stakeholders.

The Geneva meeting, held from 8 to 11 December, focused on the hurdles facing refugees in cities and other urban settings, the objective being to spotlight the specific humanitarian challenges raised by the growing presence of refugees in urban settings.

Khan had been invited by the UNHCR to lend her voice and experience to the discussion.

"In South Africa where all refugees have freedom of movement - whether they live in an urban or rural area - the protection space has for refugees have unfortunately shrunk," she says. "Most refugees feel unsafe in South Africa, and the introduction and implementation of the UNHCR's revised urban policy in South Africa should be welcomed by government, civil society and the refugees themselves."

The UNHCR's urban policy is comprehensive, covering all aspects of urban living/ non-camp living, adds Khan. It also opens the door for the UNHCR to provide more meaningful assistance to both government and refugees in South Africa.

"The assistance offered is markedly different to the care and maintenance programmes provided to refugees based at refugee camps, to a more lasting rights-based programme that will hopefully lead to self-reliance."