Pacemakers that can take a beating 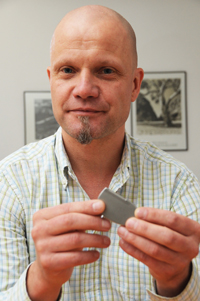 Pacesetter: Dr Tom Franz and colleagues have measured the pressures that pacemakers are subjected to in a live subject.

UCT's Cardiovascular Research Unit was recently shortlisted for a major technology award for a project that that could lead to the next generation of robust pacemakers.

Engineers have their work cut out for them in designing and building pacemakers. In addition to the growing demand for these life-saving machines - which control heartbeat through a series of electrical pulses - pacemakers also need to last longer these days and, as more may be implanted into children, they should stand up to a few knocks.

It's just that up to now, no-one's measured the kinds of pressures and forces they're subjected to once they're actually implanted into live subjects. Which means that the implant in a particularly bouncy child could take a beating, and needs to be designed with this in mind. (Older children are usually advised to avoid contact sport, for example.)

"Technology now allows for pacemakers to get smaller and thinner," explains Dr Tom Franz of UCT's Cardiovascular Research Unit in the Chris Barnard Division of Cardiothoracic Surgery, who has been leading the project on the UCT side. "The problem is that the thinner they get, the more susceptible they are to bending."

Recently, however, a team from the unit and their industry partner - including one of Franz's students, Hamman de Vaal - put numbers and details to the pressures and forces exerted on pacemakers.

The UCT surgeons, lead by Dr Jacques Scherman, implanted a measuring device in a pacemaker shape - not much bigger than the original iPod Shuffle - just under the pectoral (chest) muscles of an animal, exactly where a pacemaker would be placed. After about eight weeks healing, during which the body builds a cocoon of fibrous connective tissue around the implant, they switched on the device via remote control, picking up essential data - such as muscle-induced forces on the implant - via its six sensors.

"It's the first time that these in vivo [in the body] forces have been measured," says Franz.

That data, which may be extrapolated to humans, has now been passed on to the collaborating company, which will feed it into future design features.

In recognition of their work, the UCT project team was recently shortlisted for the Department of Trade and Industry's 2009 Technology Award in the advanced high-technology category. Alas, they didn't win, but they do have the satisfaction of knowing that their work could still save lives.