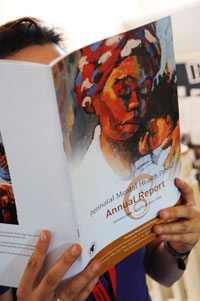 The Perinatal Mental Health Project (PMHP) raised the bar in its work to address the "hidden pandemic" of pregnant women and mothers in psychological distress when it launched a film on the subject last week.

Caring for Mothers, the 15-minute film, is set to help PMHP in its advocacy, fundraising and training functions. The Project is located within UCT's Mental Health and Poverty Project (MHaPP) in the Department of Psychiatry and Mental Health.

The film depicts the journey of young Xolelwa, a client of the Project, who becomes pregnant without planning to. Her unplanned pregnancy leads to total isolation and thoughts of committing suicide. But after meeting a PMHP counsellor, her mood begins to shift, and she starts approaching life positively. At the end, Xolelwa gives birth to a son and thanks the project's counsellor. "Without your help, I would be dead by now," she says.

Xolelwa is among the lucky ones.

According to research, maternal mental illness has reached epidemic levels in low-income and informal areas, with one in three women in Khayelitsha (where Xolelwa lives) found to suffer from postnatal depression. This is nearly three times higher than the prevalence in developed countries.

The consequence of untreated maternal mental illness is a "vicious cycle", said Dr Simone Honikman, director of the Project. Psychological distress in mothers may impact on the foetus during pregnancy and on the child after the birth.

"The effects may be physical, intellectual or emotional, and may be long-lasting," she explained. "Therefore maternal mental illness poses a significant obstacle to social and economic development."

The film gives a picture of the nature and potential outcomes of the Project's work. It is hoped that it will help to foster recognition of its value among policymakers, donors and society at large.

"We would love it to generate a response from those in power so that we may reach our vision of integrated and effective mental health-care for all mothers in South Africa."

Professor Marian Jacobs, dean of the Faculty of Health Sciences, noted that despite the enormous global burden of disease posed by mental illness, those who live with these disorders have not received adequate attention - both in terms of the Millennium Development Goals and in terms of mortality data which do not reflect the suffering of those that survive.

The PMHP also launched its multimedia website featuring all the essential information on the project.