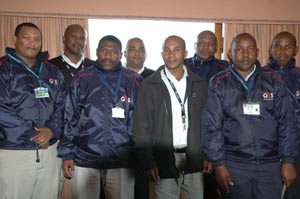 Gary Dyssel was so concerned about the high crime rate in his Elsies River community that he wanted to be part of a process that would change that.

Six years ago he joined the Campus Protection Services at UCT as a crime prevention officer for the G4S Security Company, and has since done more than his share of crime fighting duty.

His acts of courage were recognised on 11 November when UCT presented him, a well as several of his colleagues, with cash awards as tokens of appreciation for their commitment in fighting crime on campus.

It was the second time that Dyssel, now CPS's crime prevention manager on campus, has been so recognised. This time he was honoured for his involvement in the arrests of car thieves in two separate incidents, and for the arrest of a cable theft suspect.

Preventing crime at UCT needs diplomacy, Dyssel said. The university is an open campus and it is difficult to distinguish between students and outsiders. "For instance, in the cable theft incident, the suspect was carrying a school bag and looked like any student," he explains.

But after a closer look, Dyssel realised that the suspect was carrying heavy objects that did not look like books. He then chased and arrested him. Copper cables weighing 5.4 kg, as well as a knife, a screw driver, pliers and a cutter, were seized.

Crime prevention presents different challenges everyday, and Dyssel and his colleagues must always be prepared.

It has also its weird moments.

In one instance, a laptop thief unintentionally revealed his whereabouts when he plugged in and used the machine in a friend's room, registering it with the ICTS system in the process. "Based on that information, we managed to track him down."

John Critien, executive director for the Properties & Services Department, said the awards were proof that UCT has been successful in curbing crime. He thanked the "servants of the students", as he described security officers, for going the extra mile in ensuring that the university community remains safe.