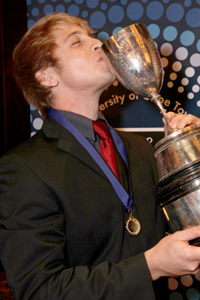 Jacques Viljoen's fine performance in fencing earned him the UCT Sportsperson of the Year title at the university's annual Sports Awards Dinner on 23 October.

Other winners at the UCT Sports Council event were:

John Donald, manager of Student Sport & Recreation, said: "I think nobody can be disappointed about the winners. They all deserved it."

Former international footballer Lucas Radebe delivered "a modest, down-to-earth and inspirational talk" on how he rose above all challenges to captain Bafana Bafana and Leeds United.