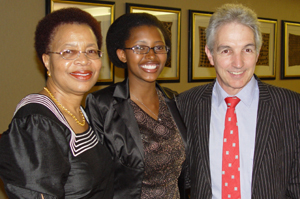 The UCT Association of Black Alumni's (UCTABA) One Thousand for One Million campaign began on a promising note when more than R300 000 was raised at the campaign's launch in Johannesburg on 27 October.

The One Thousand for One Million campaign aims to get 1 000 black alumni each to pledge R100 for 12 months, which will bring in R1 million that will go towards bursaries for UCT students.

Many of the nearly 40 alumni and UCT friends who attended the fundraising dinner not only pledged their financial support, but also offered networking, advisory and mentorship services.

At the event, UCT Chancellor Graça Machel applauded the UCTABA, which aims to raise funds for students who are academically capable but financially needy, as a movement that can contribute towards reshaping the country. The UCTABA was established in 2007 to get black graduates to play their part by actively participating in and contributing to UCT.

Since then, the group has established regional structures in the Western Cape, Eastern Cape, Gauteng and KwaZulu-Natal.

The Development and Alumni Department, in partnership with the UCTABA, will host similar fundraising events in other regions to inspire alumni to contribute towards the One Thousand for One Million campaign.