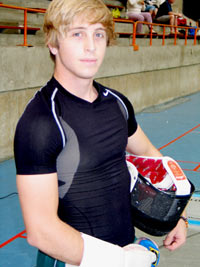 Jacques Viljoen's fire performance in fencing has earned him the UCT Sportsperson of the Year title at the university's annual Sports Awards Dinner on 23 October.

Viljoen (pictured) is undoubtedly a rising star in fencing.

Other winners at the UCT Sports Council event were:

"I think nobody can be disappointed about the winners. They all deserved it," he said.

Former international footballer Lucal Radebe delivered "a modest, down-to-earth and inspirational talk" on how he rose above all challenges to captain Bafana Bafana and Leeds United.