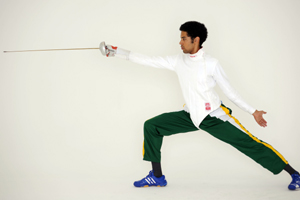 There are up-sides and down-sides to a 'small' sport like fencing, says Michael Malahe, who made his very respectable South African senior debut this year.

One of the pros is that, because of the small pool of good fencers, you can fight your way up the rankings in quick time.

The biggest con is the lack of quality sparring partners. "It's very frustrating to train with the same small group of people for long periods, because it's easy to get into a rut where we become too comfortable with each other," says the imposing Malahe, 21, an épéeist who at 1.89m (6' 3") has a distinct reach advantage over his local rivals.

So even though he gets to train with three SA fencers at UCT - Yasmin Hankel, Giselle Vicatos and Jacques Viljoen - what really sharpens his game is international competition, which he had plenty of at the All African Fencing Championships in Dakar, Senegal, in August, and the World Fencing Championships in Antalya, Turkey, in September and October.

It's here that experience counts most, says Malahe.