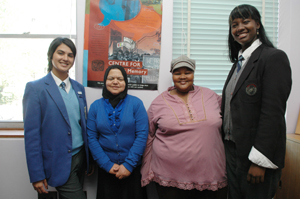 Last year the award was won by Yumnah Jackson of Bridgetown High, who was also mentored by the centre.

The award, which is a Department of Education initiative, is an extension of the Bridging the Digital Divide programme which encourages learners to develop an understanding of the broad history of South Africa and the richness of the histories of their local communities through oral history research.

West's research was on local soccer, focusing on the oldest club at Cape District Football Association, Spenston AFC, which is 105 years old and still going strong.

Her research looked at the early establishment of soccer in the Western Cape, how Spenston was formed, the establishment of Cape District, their early racial policy, the club's best years between 1950 and 1962, the challenges the club faced thereafter, as well as the coming 2010 World Cup.

Akimana's topic was refugees in South Africa. Being a refugee herself, her focus was on why they fled Burundi, their expectations of South Africa before they arrived, xenophobia, human rights and the relationship between locals and foreigners.

Both learners are among more than 1 000 learners who are benefiting from the Andrew W Mellon Foundation-funded programme, which strives to bridge the divide in education and information technology skills transfer.

"The programme concentrates on the generational and cultural divisions between apartheid survivors and their descendants and the IT skills divide between what is perceived to be a 'developing' country and first world technology," explained Nuraan Allie, schools liaison officer at the centre.