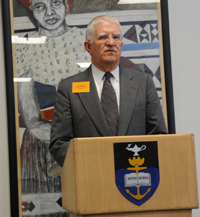 UCT has seen a growing number of research papers published in journals and a significant transfer of skills and capacity - thanks to the Mellon Visiting and Retired Scholars Mentorship Project.

Since 2007, when the project was established, 120 young or developing researchers had been mentored by 21 senior academics in a visiting capacity, either as retired professors or on sabbatical from elsewhere.

The number of papers published by the cohort of 'mentees' over the past year has increased five-fold and numerous first-time papers have been presented at national and international conferences. Mentorship interventions have also resulted in a number of successful grant applications.

This wide-spread source of expertise brings with it a diversity of perspectives - whether academically, professionally or culturally - that enhance the capacity of the mentees.

The project aims to strengthen the next generation of researchers through a process of discipline-specific mentoring, while simultaneously establishing a culture of mentorship.

Dr Stuart Saunders, special advisor for the Mellon Foundation South African programme, said the initiative was new in the country, and that it had produced "outstanding results".

He said the programme was conceptualised in a way that would maximise the opportunity provided by senior researchers as a key resource for producing the next generation of scholars. They bring a wealth of experience into departments where their sustained presence over a period of time provides a nurturing environment which fosters research activity.

Dr Don Randel, president of the Mellon Foundation in the US, said the foundation was concerned with the development of faculty in America, and were happy that the same goals were being pursued in South Africa.