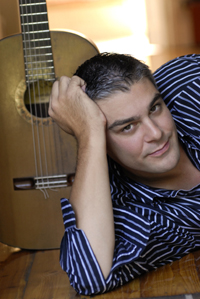 The sequel to Grace's debut album, Granada, Sevilla is the second in the Music of Spain series.

Both albums feature works by composers such as Isaac Albéniz, Enrique Granados and Francisco Tárrega, but with Sevilla Grace has also included compositions by Joquín Rodrigo, the composer of the famous

"This is an important year for the guitar," says Grace. "It's the centenary year of the deaths of both Albéniz and Tárrega; the great Rodrigo died ten years ago in 1999, and 1909 was the year in which Andrés Segovia gave his debut recital in Granada. I wanted to celebrate all these events, so earlier this year I rereleased Granada with a bonus track, and with the release of Sevilla, I think I've succeeded in making 2009 a commemorative year!"

Grace is currently setting up the Stringwise Young Artist's Trust with the aim of providing financial assistance to students wanting to travel overseas.