Male identity on the dance floor 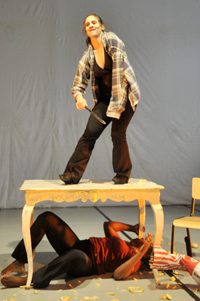 As director of the UCT School of Dance, Gerard Samuel wants to put practice into theory. To this end, he recently launched what he hopes will become a series of annual symposiums. The first meeting, held on 8 August, was titled Mapping the Man, and here panellists, students and guests explored the "identities of masculinity" in dance, and tackled the issue of the training of male dancers in South Africa.

It's the role of the school and its director to provoke and stir, says Samuel. And while the discussion on the day did not always stay on point, the symposium delivered exactly what he had hoped for - lots of smart debate.

"It's important that the School opens its doors to these kinds of discussions," says Samuel. "This way we engage with dance in a scholarly way."

Practice - dance itself - is informed by theory, and vice versa, he adds. "The thought process behind the creation is what we want to instil in the next generation of student dancers."

And to put theory back into practice, Samuel had set a challenge to those student dancers - translate the day's topic into dance. The result was Kombuis Dances, directed by Samuel and performed at the end of the symposium.

In a series of short contemporary-dance pieces, students used the kitchen - where labour is usually divided according to gender - as a setting in which to explore and reinvent those stereotyped gender roles.