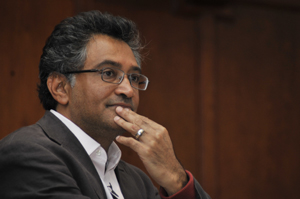 The newly established Gordon Institute for Performing and Creative Arts (GIPCA) is presenting a series of public lectures, to generate intellectual curiosity and get the community to engage with the intellectual life of UCT.

Called Great Texts/Big Questions, the talks form part of GIPCA initiatives to engender a culture of exchange of ideas, opinion or conjecture, and are co-ordinated by the institution in conjunction with the Centre for Creative Writing.

Thought leaders of national and international prominence will each discuss the personal significance of a particular book or artwork.

The lectures start at 17h00 in the Hiddingh Hall at Hiddingh Campus, and will run throughout the year.

The events kicked off on 6 August, with novelist, playwright and academic André Brink taking the stage and discussing Don Quixote by Miguel de Cervantes.

He was followed by AIDS activist Zackie Achmat (pictured) on 13 August, and cartoonist Jonathan Shapiro (AKA Zapiro) on 20 August. Professor David Benatar, head of the Department of Philosophy, will be the next speaker (on 27 August), followed by neuroscientist Mark Solms (3 September) and former UCT vice-chancellor Dr Mamphela Ramphele (1 October).