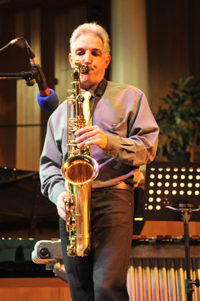 UCT's Vice-Chancellor's Concerts have traditionally been named only in honour of UCT's CEOs, not because they're actually on the programme.

At least, that was the case until this year, when Dr Max Price, UCT vice-chancellor and keen saxophonist, made his stage debut.

The occasion was the first of the two VC's Concerts for 2009, which showcase the young talent-in-training at UCT's South African College of Music (SACM).

Price did the formal hellos, and after the interval joined the UCT Big Band, under Mike Campbell, on stage.

Price, who's only been playing the sax for around three years, admitted to a few butterflies before the event.

Just two rehearsals of about 10 minutes apiece didn't help his stage fright either, he said.