Play on marriage and identity for Edinburgh Fringe 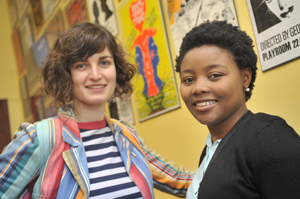 UCT alumnae Leila Anderson and Cindy Mkaza (pictured left) are at the Edinburgh Festival this week to stage their one-hander play, Sleeping with Inkosazana, with Anderson as director and starring Mkaza.

It will run for 10 shows, as part of the Fringe.

The two studied theatre and performance at UCT, graduating in 2006, and created the play for last year's Out of the Box festival, run by Unima, the South African association for puppetry and visual performance.

Among other themes, the play examines marriage and relationships in our society.

The story is set in a mythical village. A woman tries to flee from an arranged marriage, but a sea spirit promises her immortality for going through with the nuptials. She will be able to marry many men, and does - always in transit between a dead previous husband and becoming a new wife - producing thousands of neglected children along the way.

There is plenty of political allegory in the play, but it is polygamy and its many facets that it highlights.

"And now we have a president who has many wives and polygamy is a concealed part of our landscape, but one that needs to be talked about," Anderson said in an interview with the Saturday Argus.

"We're not trying to say it's bad," Anderson said. "Polygamy involves very complex relationships; there are notions of family and a communal sisterhood that are wonderful. But there's the aspect of it being a remnant of a patriarchal culture, which needs to adapt to changing issues and concerns like HIV."

"There should be greater debate and public discourse around the topic."