Take this UCT duo to lunch 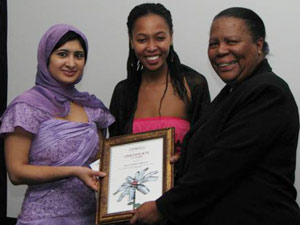 Critical role: Naadiya Moosajee and Mabohlale Mampuru, founders of SAWomEng, present a certificate to Naledi Pandor, Minister of the Department of Science and Technology, for speaking at the 2009 SAWomEng Conference in June.

The Mail & Guardian newspaper has listed UCT graduates Naadiya Moosajee and Mabohlale Mampuru, founders of SAWomEng, among the Top 300 Young South Africans you have to take to lunch.

The two, who established the non-profit organisation in 2006 while they were third-year engineering students at UCT, were listed in the science and education categories.

The paper honours younger South Africans (under the age of 35) who are making a difference in society.

The student-run SAWomEng, is aimed at celebrating, empowering and educating women in the field of engineering, and is also concerned with attracting women to engineering (and retaining them), a field in which women are still under-represented. Moosajee heads up the organisation in Cape Town and Mampuru in Johannesburg.

Their initiative was praised by government at the 2009 SAWomEng Conference which was held in June.

Geoff Doidge, Minister of Public Works, described the SAWomEng concept as "wonderful", and his counterpart in the Department of Science and Technology, Naledi Pandor, said the young women were "playing a critical role in transforming the face of engineering".