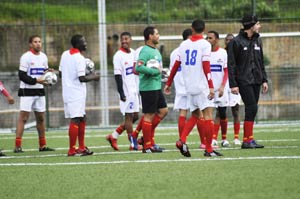 High ball: Santos Football Club, one of two Cape Town teams in the Premier Soccer League, are using UCT's new R10-million Astroturf pitch for training during the varsity vac - and their members seem to love it.

UCT's Fifa-accredited Astroturf soccer field is up and running - and is in high demand.

Since March, UCT's 40 internal football teams have been using the R10-million pitch near Kopano residence, and the field has attracted interest from semi-professional, professional and international teams.

Sports administrator Peter Buckton said Iraq's national team had approached UCT to use the field for their warm-up game against Poland before the Confederations Cup. But because the field has no stands yet (UCT needs to generate about R350 000 to build 225 seats), the Iraqis moved their game to the University of the Western Cape.

This week, Santos Football Club, one of two Cape Town teams in the Premier Soccer League, is using the artificial turf for training - and their members seem to love it.

Boebie Solomons, Santos' director of coaching, said he has been using Astroturf for many years, including those pitches in Hartleyvale and Athlone, but considers the UCT field "excellent". He said it was close to grass and that such fields were particularly important in Cape Town, where heavy winter rains often flood grass fields.

"This is especially during in-season when you need to do a lot of match drills," he explained.

His star midfielder, Romano Scott, found the ball moves faster on the artificial field - and that would improve their technical capabilities.

"This gives us more confidence and helps with alertness," he said. "That will put us a step ahead when returning to a grass pitch."

Sicelo "Mighty" Mbengashe, a final-year BCom student who plays for the UCT soccer club and Forest Hill residence, said the turf exposes players who can't control the ball, but helps those who can to master it.

John Donald, manager of Student Sport & Recreation, said the field is intended for students but would be hired out during vacations and lecture times. The field, with a lifespan of 15 years, has floodlights for night games and a small Futsal pitch for five-aside games.

"Our intention is to establish a Futsal league for residences," Donald said.

The Local Organising Committee for next year's Fifa Soccer World Cup and the City of Cape Town have asked UCT to put the field on standby in case rainy weather makes it impossible for teams to practice on grass fields.