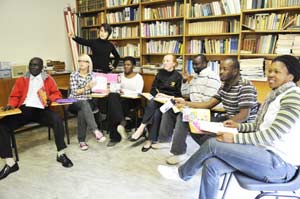 The newly created master's by coursework which specialises in teaching French as a foreign language, offered by UCT's School of Languages and Literatures is the first degree of its kind in Southern Africa.

The degree follows on the heels of its honours counterpart, which was introduced in 2008, another first for the subcontinent.

"The degrees are aimed at training teachers," says course convenor Dr Vanessa Everson. "This includes both future teachers and those who have already entered the field but want to build their skills."

Everson explains that the degrees are a result of collaboration - both inter-institutional and inter-departmental.

The University of Grenoble in France, which already has a similar programme, helped during course development and continues to assist with quality assurance. The French Embassy's Bureau for Co-operation and Cultural Action for French is providing bursaries and books, and students receive practical teacher training at Alliance Francaise. 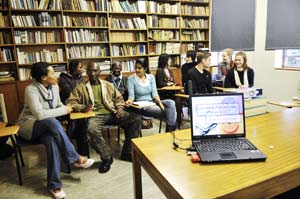 Both degrees are also supported by collaboration with UCT's Linguistics, English Language and Literature and Centre for Educational Technology departments.

"It's also resulted in African collaboration," notes Everson. "Master's students are now working on a programme to bring French studies to high schools in Lesotho, and we are assisting the University of Kenya to establish a similar programme."