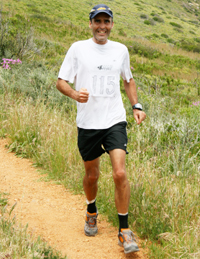 It didn't take Professor George Schoenbaechler long to make his mark at UCT. Since arriving with his wife and two sons from Collegium Helveticum in Zurich, Switzerland, in August last year, he's broken all of three records at the Athletics Club. Schoenbaechler, 45, a visiting scholar with the Department of Psychology, started rewriting the record books with his half marathon time of 1:19:53 in the men's 40+ category in the Hewat Classic last year. This year, he finished the Bay to Bay in 2:01:29, a new best in the 30km (men 40+) run, before clocking the best UCT time of 3:02:47 in a marathon (men 40+) at the Peninsula Marathon. Those runs earned him top spot in his age category in the Hewat race, and fourth places in both the Bay to Bay and Peninsula Marathon. We asked him a few questions.

Who do you run for back home?

In Switzerland I run for the ASVZ, the Academic Sports Club of Zurich, where I'm the marathon coach for students as well.

How long have you been running?

I did my first competitive race in 1985.

In Cape Town, you've done both road races and some trail running. Do you have a preference?

I have a slight preference for trail running as I like to be in natural surroundings. My daily training in the late afternoon leads me from UCT up to King's Blockhouse over the mountains to Kloof Nek, and then around Lion's Head to Sea Point, where I live. It's such a stunning route!

Silly answer: the competitions don't start so early in the morning! Seriously, there is no big difference. There is a lot of fun to running, and good friendships between runners both here and there. In Switzerland there are a lot of mountain running events, but only uphill. As I'm struggling with downhill running, I miss those kinds of events a little bit. But on 18 April I'll have the opportunity to compensate as I'm going to participate in the Platteklip Charity Challenge, an event to raise money for a crÃ¨che in Samora Machel. The aim is to summit Table Mountain as many times as possible between sunrise and sunset. If somebody wants to sponsor me they can go to www.charitychallenge.co.za.

Any Cape Town race stand out for you?

I really liked the Three Peaks Challenge in November. The combination between running in the city and running in the mountains was fascinating. It was very special to see how the atmosphere of the city changed on a Saturday morning. Coming back from Devil's Peak at 7 am the city was very calm. After Table Mountain at 9 am, life came back to town slowly, and at 11 am the city appeared lively and vibrant.