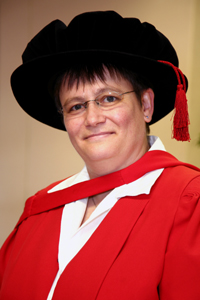 In the red: In her inaugural lecture, Prof Vanessa Burch.

Africa is the only world region unlikely to meet the United Nations 2015 Millennium Development Goals as a result of healthcare deficiencies, Professor Vanessa Burch said in her inaugural lecture, Health Care in South Africa Today, on March 25.

Africa is constrained by several challenges, including a heavy burden of disease, lack of money, and the size and shape of the clinical platform.

The burden of disease in South Africa is growing, fuelled by HIV/AIDS, said Burch, based in UCT's Department of Medicine.

"HIV prevalence levels are not flattening out. TB cases have more than doubled and there hasn't been an increase in staff or resources."

The problems are exacerbated by the growing divide between public and private healthcare.

She also pointed out that the number of beds in the public sector hadn't risen, despite a growing burden of disease.

It is also difficult to recruit doctors to work in rural areas, where there is one doctor for every 30 000 people, said Burch. Only 31% of the country's 34 687 doctors work in the public service; 35% of posts are vacant, and 15% of these are specialists.

"The rural situation is desperate."

The country - and continent - would have to increase the number of medical graduates, and recruit more than one million additional healthcare workers to cope with the burden of disease.

However, the situation was aggravated by migration.

"Twenty-two percent of our medical graduates are no longer practising in South Africa."

Wits, UCT and the University of Pretoria are among the top 'emigrating' medical schools in Sub-Saharan Africa.

"There are no simple solutions. We need multiple strategies and feasible options in healthcare, for the greater good of all.

"But it's going to cost money."